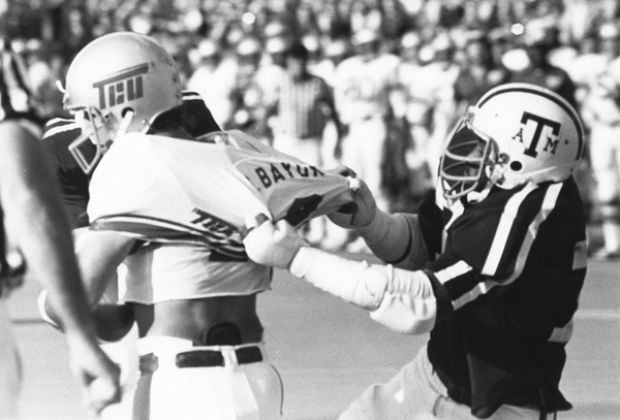 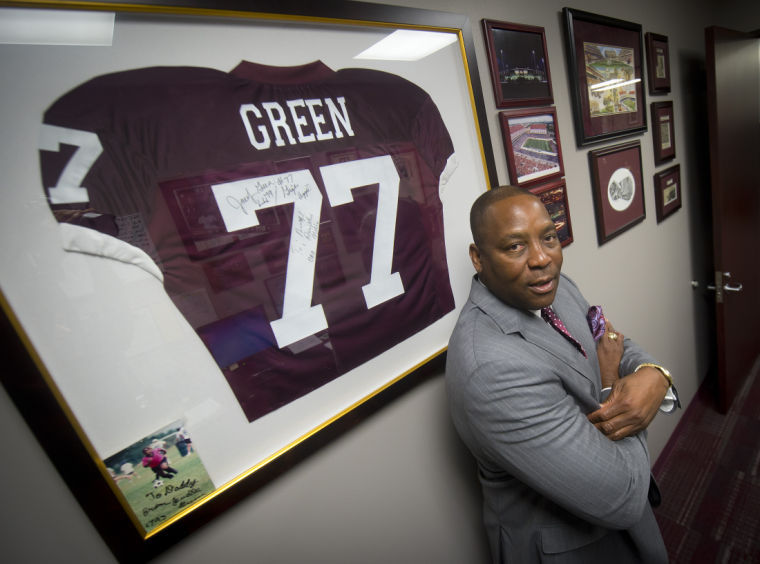 This week has been a reunion of sorts for Jacob Green. The former Texas A&M defensive end, who played for Seattle Seahawks from 1980 to 1991, is in Phoenix along with former teammates Cortez Kennedy, Steve Largent and Dave Krieg for Seattle's Super Bowl matchup with the New England Patriots.

Green is the Seahawks' all-time sack leader, and second in A&M history. He has worked for the 12th Man Foundation as the vice president of major gifts and endowments since 2006, and also serves on the Seahawks' Board of Advisors.

We caught up with Green this week and asked his thoughts on his memories from Seattle, the Seahawks adopting the 12th Man phrase and who is going to win on Sunday.

How have you seen A&M and College Station change since your playing days, and also since you've come back to work?

Green: Wow, just totally amazing. You go from when I was in school, from 65,000 to 80,000 [Kyle Field seats], to now with 102,500. It's one of the most spectacular venues you can watch a game at, and it was already that, but it's just improving. The Astrodome was the Eighth Wonder of the World, so we have to be at least the 20th. So, it's been quite a change for the town, the city of College Station, for the community, the fans. And to see the university grow from 26,000 maybe when I was there, to the 52,000 now. It's amazing to be a part of it, and gratifying, and something that's an honor to be a part of a university so grand.

Seahawks fans have earned a reputation as the loudest fans in the league. How do they compare today to when you played?

Green: It was the same. It was loud. Loudest crowd in professional sports history, and it still is. It's as loud as you can get. It's pretty amazing. The fans are so much like the fans at Kyle Field. They stand throughout the whole game.

Is it weird being an Aggie and seeing the way Seattle has adopted the 12th Man phrase?

Green: No, not at all. The original 12th Man, there is no question it is A&M. And when I was playing in Seattle, it was the 12th Fan. For whatever reason people started saying 12th Man and they fell into it. And then, in 2006, right after I started working for 12th Man Foundation, the Seahawks and A&M made a mutual agreement that they could use the 12th Man. It originally started as being the 12th Fan, though. At the beginning of time, it's always been the 12th Man for A&M. We are truly the 12th Man.

You were on the Seahawks when the team retired the number 12 for its fans at the Kingdome in 1984. How did the fans receive that?

Green: It was always wild. The fans were always screaming. Like I said, the fanbase for Seattle is pretty much like a college atmosphere. All those years, we kind of played like a college team. People say now they play like a college team. They get all excited. That's why they're playing for a second championship in two years. It's amazing for all the fans in Seattle and the same at A&M. Our organization set the tempo for fans being crazy and wild.

You and another Aggie great, Lester Hayes, who played for the Raiders, both played in the AFC West in the 1980s. Was there ever any trash talking or any memorable moments from when your teams would meet?

Green: Lester and I are really are good friends. ... When Lester came to Seattle, he'd come to my house for dinner on Saturday before games. It's the same as now, we see each other before games, as time permits. We were always friends and still are friends. I talked to Lester just the other day.

Who are some of the other players you keep up with from your time with A&M and Seattle?

Green: From my A&M days, I see a lot of the guys who come back that played during my time, and then guys who played after me. But I see a lot of the guys that I played with in Seattle. There are several guys that I talk to once a week or so. Cortez Kennedy and I talk all the time. Reggie McKenzie and I talk all time. Seattle for me has always been a place I call home. My daughters were born there. My son-in-law played there and they all went to A&M. Three of my daughters played soccer at A&M. It's kind of unique and fun, and things don't always happen like that all the time.

What is your involvement with the Seahawks today?

Green: I'm involved a lot. I'm on the Board of Advisors in Seattle. I get back for five or six games a year. I'm pretty involved in a way that's good for myself and I think for the Seahawks and for A&M, because I represent A&M as an ambassador whenever I'm out. So, it's an honor. It's an honor to be a part of both organizations.

Who wins on Sunday and what will the score be?

Green: Seattle wins. No score, as long as we win. We'll take care of business.