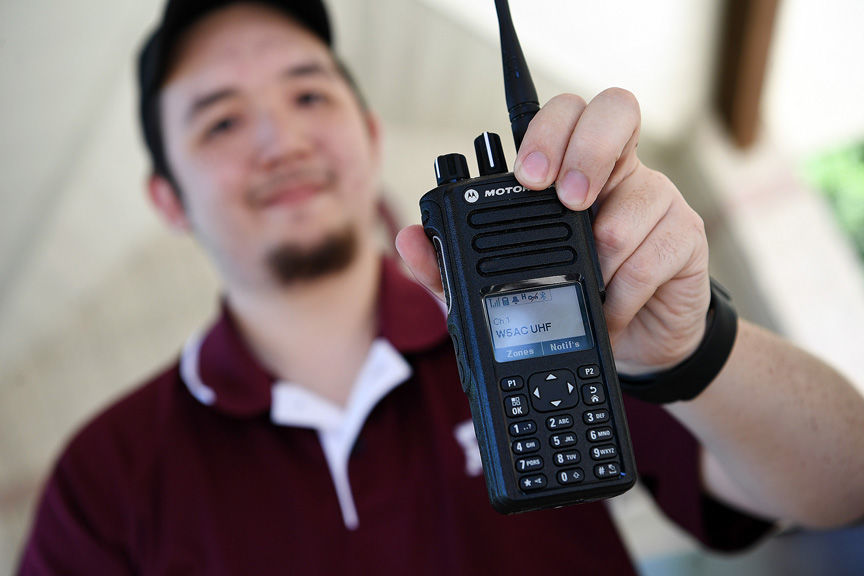 Connor Farrell of the Texas A&M Amateur Radio Club holds a portable radio Wednesday at John Crompton Park in College Station. The club has been in regular contact with Dave Rootes, who lives in southern England. 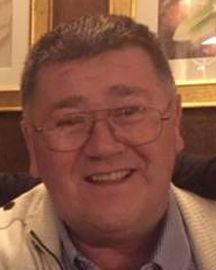 Like a lot of people these days, Dave Rootes is forced to bide his time in isolation.

The 63-year-old retired communications professional living in southern England has medical issues that cause him to be immunocompromised. As a result, his local government issued him a letter recommending he not leave the house — even to take a stroll — during the coronavirus pandemic. Rootes’ wife died of cancer less than two years ago, and the only experience he has with the outside world as COVID-19 grips the globe is opening his front door to pick up the groceries his daughter leaves on the porch.

An amateur radio operator, Rootes reached out to other English broadcasters with no luck. An antenna on his device broke, so he connected to an online program called EchoLink that allowed him to reach out across the Atlantic Ocean. Rootes, who was longing for someone to talk to, called out to the void through the program last week and asked if anyone could hear him.

Soon, most of the club’s dozen members hopped on the air and joined in the conversation.

“I think that night, I want to say they were talking till pretty late in the evening ... for hours,” said Connor Farrell, Texas A&M junior and W5AC president.

Not long after the Texas A&M students began chatting with the friendly British voice, Bryan Amateur Radio Club president Phil Gates and his associates joined in. Both Texas A&M students and BARC members involved with ham radio have been able to broadcast over repeaters stationed on the A&M campus and on two repeaters in Bryan and reach Rootes’ connection in a way that might not have been possible without Rootes’ use of  EchoLink, Gates said.

The new friends have discussed differences between Texas and the UK, stories from Rootes’ life and career and Aggie traditions. Sometimes, they’ll even talk politics and leaders’ attitudes toward the pandemic.

Because Rootes is quarantined, time doesn’t make difference, he said. He eats when he gets a meal. That’s the point of connection with people in Bryan and College Station — he isn’t starving, but he is missing human contact.

“The other amateurs are keeping me supported over in the U.S.,” he said. “... This is keeping me going, keeping me sane. It’s giving me something to think about and look forward to.”

About 222,000 people, including Rootes, live in the greater Swindon Borough. According to The Guardian, as of Thursday, 40 people in Swindon have tested positive for COVID-19. Rootes said his grandchildren’s father recently was in the hospital for three days with COVID-19 and only recently was discharged.

“I am frightened,” he admitted. “I am terrified. The worst thing I’m seeing personally is, if it does sort of catch up with you and you have to go in hospital, you have to lie in bed and die alone. You don’t have any family with you, and nurses and doctors are too busy, from what I understand. You’re alone taking your last breath, and that is absolutely terrible.”

Not only has Rootes spoken to the Aggie hobbyists, but also to people elsewhere in Europe, including a man in Portugal who lost his wife to the virus. Rootes said amateur radio is “almost as good as medicine.”

Gates and Farrell have seen Rootes’ conversations bring delight and joy to their own club members in Brazos County. Gates pointed out that another W5AC member is the caregiver of housebound parents, and during this time of quarantine, her parents have felt joy listening to Rootes talk.

“Talking to Mr. Rootes is a treat,” Gates said. “I have radio at home, and my wife and daughter turn up the volume because they love hearing his accent and hearing him tell funny stories from his past. They burst out laughing.”

Rootes said he feels amateur radio is special due to all the work a person puts into modifying and running a radio, and because of the uncertainty of whom one might meet from all over the world. It’s not just a good distraction, he said. It’s much more.

“What I am trying to achieve here is to get my thanks over to the amateur radio people in your town for sort of putting their arm around me and taking me into their family,” he said. “I want to be able to say thank you. If it wasn’t for the support I am getting from locals in your area, I would be so isolated and watching TV, going mental. ... You don’t just say that I’ve got a few friends in amateur radio. I’ve got a family in amateur radio.”