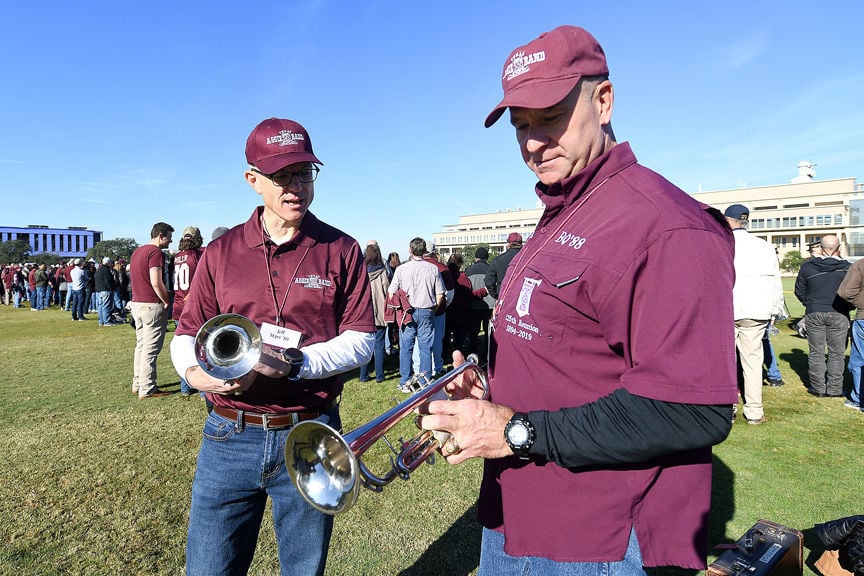 Jeff Starr, left, and Tommy Toles hold the trumpets they played when they were members of the Fightin’ Texas Aggie Band while attending Saturday’s reunion at Texas A&M celebrating the band’s 125th anniversary. 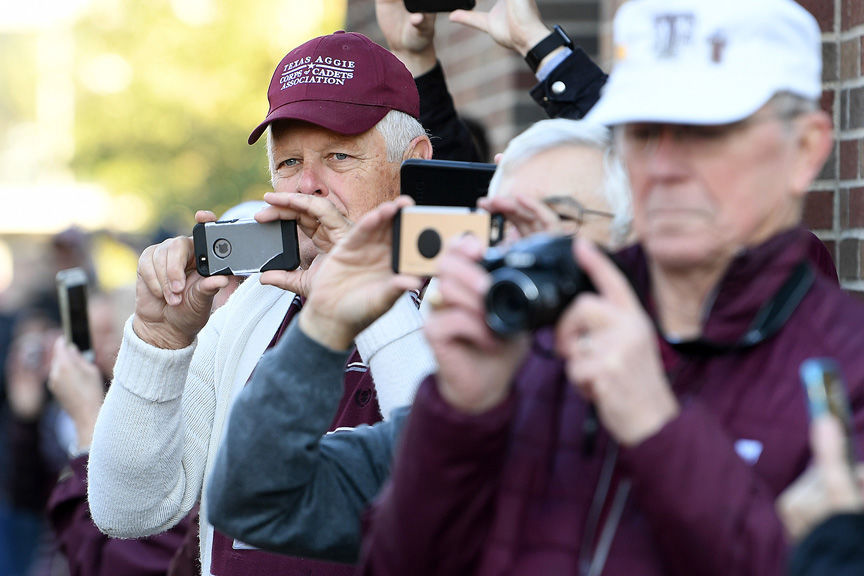 George House joins fellow former members of the Fightin’ Texas Aggie Band as they watch current members step off from the Quad ahead of Saturday’s football game between Texas A&M and UTSA. The band is celebrating its 125th anniversary this year. 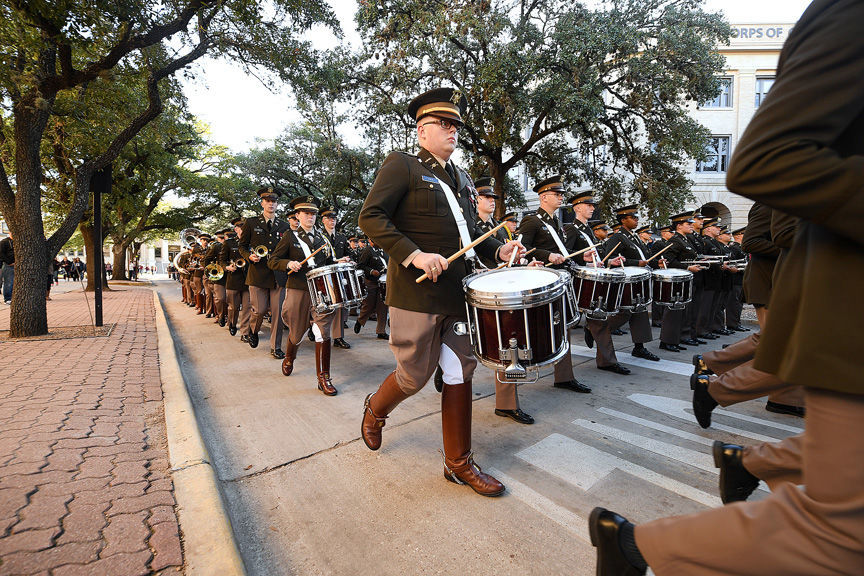 The Fightin’ Texas Aggie Band marches through campus on Saturday ahead of Texas A&M’s game against UTSA. The band is celebrating its 125th anniversary this year.

Jeff Starr, left, and Tommy Toles hold the trumpets they played when they were members of the Fightin’ Texas Aggie Band while attending Saturday’s reunion at Texas A&M celebrating the band’s 125th anniversary.

George House joins fellow former members of the Fightin’ Texas Aggie Band as they watch current members step off from the Quad ahead of Saturday’s football game between Texas A&M and UTSA. The band is celebrating its 125th anniversary this year.

The Fightin’ Texas Aggie Band marches through campus on Saturday ahead of Texas A&M’s game against UTSA. The band is celebrating its 125th anniversary this year.

Jeff Starr and Tommy Toles, who played together in the Fightin’ Texas Aggie Band in the 1980s, weren’t always best friends.

More than 30 years ago, when they both played trumpet for the band’s A-Company, Toles — a member of the class of ’88 — was known to put Starr, class of ’89, through the wringer while exercising his leadership.

On Saturday morning, the two stood together on the edge of Simpson Drill Field, laughing, joking and watching their adult children — both now in the Corps of Cadets — march with their respective units.

“The most interesting thing for me is how fast we reconnected, and how much time has flown by,” Toles said.

Starr and Toles were among the hundreds of former Aggie Band members in College Station this weekend for the 125th anniversary celebration of the band.

Starr and Toles joined in Saturday morning, carrying their old trumpets in the original cases from when they were band members. The two said they haven’t performed like that since the band’s 100-year anniversary in 1994. Starr admitted he’s had dreams recently about being a student again, horrified to realize he forgot to practice a certain march.

“I was relieved to wake up and be 50 years old,” he said, laughing. “... Today, playing again was humbling, and it was fun bringing back those memories — including walking in the cold and dark to get to the band building.”

Three decades after graduating, the men’s college experience is still something so important to each of them.

“Within [Aggie] Muster tradition, there’s a phrase that says to live over again your days at A&M, and I felt that way here; we were living our days,” Toles said. “It felt old hat to do that again, and when I started marching I felt, ‘Yes, this is living.’ ”

Several Texas Aggie Band Association members from the Class of ’89 were in attendance this weekend, including Andrea Abat, who had played trombone for A-Battery and today is a board member for the Texas Aggie Corps of Cadets Association. Abat’s friends pointed out that she had been the first woman to play through a full four years in the Aggie Band. Abat said that although she did receive pushback from older male students during her time in college, her peers in A-Battery became her allies.

“It was immensely hard for her since she was the first in an all-male band, but she surmounted and conquered all of that,” said Abat’s friend and former bandmate, Robert Redding, class of ’89.

“I was so grateful for the opportunity to march with these guys on Kyle Field,” Abat said. “... There is not any band like it anywhere, not with this level of instrumentation or intricacy of marching, and to be a part of that was such a blessing to me. A lot of the things I learned on the Quad I apply to my life, such as honor, discipline, patriotism and teamwork.”

“Now to see women in the band in all positions of authority, playing all instruments, it’s heartening,” she said. “Change is important for the university, and we can appreciate that it’s not what it used to be. Traditionally this is a military marching band, and [currently] they play the marches we played, but also some new music. If we don’t keep up, we won’t have more people who want to be in the Corps, play in the band and serve their country.”

David Boles, Class of ’93, hasn’t been to too many Aggie games since graduation because his 24-year career with the Air Force took him to places far away, with little access to Kyle Field. Boles had played drums with B-Company during his time with the band. He was happy to play his drums with the Combined Spirit Band on Saturday.

“That was awesome,” he said. “It was the first time I have been a part of the Aggie Band since the spring of 1993.”

Boles was instantly able to mingle with other alumni and start conversation just by walking through the tailgate area with drumsticks protruding from his back pocket.

“It’s always good to get together with Aggies you haven’t seen in years, and to meet really old Ags, meet current Ags and compare stories,” he said. “Everybody will tell you how things changed over time, and the term ‘Old Army’ has gone to hell, but there are so many more shared experiences than there are different. Things change but things are still the same, and that’s what unites everybody as Aggies.”

Photos from the football game between Texas A&M and UTSA at Kyle Field on Saturday, Nov. 2, 2019.

Texas A&M football coach Jimbo Fisher acknowledged the fans who made it to a second straight 11 a.m. kickoff in time to be heard early as the Aggies hosted Texas-San Antonio on Saturday.

As Texas A&M’s players jogged off the field after an opening-drive punt Saturday against Texas-San Antonio, Jimbo Fisher shouted at his team to wake up. It took until the second half for the sleepy-headed Aggies to roll out of bed, but they ultimately took care of business. Here are three takes from A&M’s 45-14 victory:

One step back and two steps forward was a winning formula for Texas A&M against Texas-San Antonio, but that might not work against South Carolina in two weeks. And it certainly won’t be the way to beat Georgia and LSU.