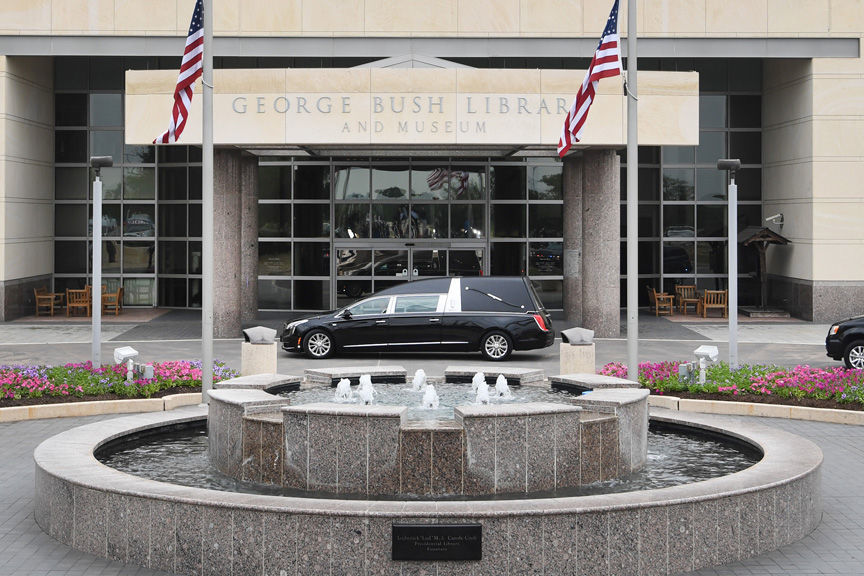 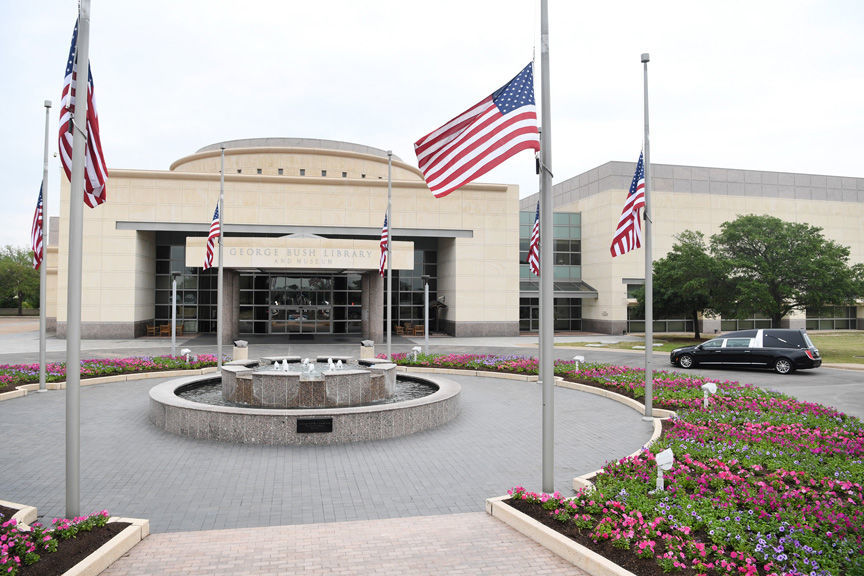 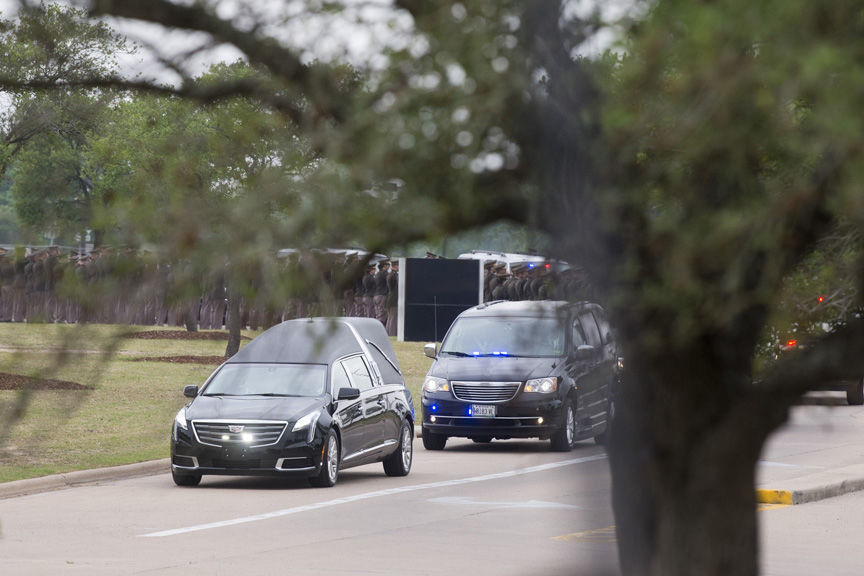 The casket of former First Lady Barbara Bush arrives at the George H.W. Bush Presidential Library and Museum on Saturday.

The casket of former First Lady Barbara Bush arrives at the George H.W. Bush Presidential Library and Museum on Saturday.

In a gated plot across from a creek, tucked among the oak trees, former first lady Barbara Bush was laid to rest Saturday at the George H.W. Bush Presidential Library and Museum in College Station during a private ceremony.

Barbara Bush died Tuesday. She was 92.

The motorcade led by the hearse carrying Bush's casket passed in front of her husband's presidential library at about 3 p.m. beneath a gray sky and light rain. In a brief ceremony attended by family members, she was buried alongside the couple's daughter, Robin, who died of leukemia at the age of 3 in 1953 and was reinterred at the library in 2000.

Upon his death, George H.W. Bush, the nation' the 41st president, also will be buried in the pastoral setting, near a large pond behind the library. On the other side of the bridge leading to the burial site, 15 members of Texas A&M's Singing Cadets sang two hymns Saturday during the ceremony -- Eternal Father and How Great Thou Art.

The burial on the west side of the Texas A&M University campus followed an invitation-only funeral at St. Martin's Episcopal Church in Houston. The motorcade, which traveled about 90 miles northwest to College Station, made its way down Texas Avenue, turned onto George Bush Drive -- renamed from Jersey Street in 1989 -- before finally proceeding along Barbara Bush Drive to the library.

There, 709 members of the Texas A&M Corps of Cadets stood at attention and saluted. Among them was Corps Commander Brad Sauer. The 22-year-old political science major from Harker Heights didn't know much about Bush. But like many of the other members of the corps who volunteered to attend Saturday, Sauer said he knew the late first lady was part of the Aggie family.

"Our participation in this event was honoring for us, but in the larger picture this is what A&M is about," Sauer said. "It's coming together and offering support to someone you've never even met."

A candlelight vigil organized by Lela Akiashvili, a student at Texas A&M's Bush School of Government and Public Service, was held outside the library Tuesday night. Akiashvili, a 28-year old Fulbright Scholar who will graduate in a month with a master's of public service and administration, said she was lucky to have had the chance to meet Mrs. Bush on campus.

Akiashvili was reading outside one day in March when she spotted her. Bush was talking a walk around the pond behind the library. Akiashvili knew this was her chance.

She congratulated Bush on International Women's Day -- it was March 8 -- and they chatted about Akiashvili's home country of Georgia.

"Then I thanked her for giving me this opportunity, because if not for her husband and herself, I would not be a Fulbright Scholar, and none of my life goals and dreams would be fulfilled," Akiashvili said. "She got emotional when she heard that, and said, 'Stop, or I'll cry.' "

They chatted a bit more and took a selfie before parting ways. A week later, Akiashvili received a letter from Bush, thanking her for the conversation and reassurance about the importance of kindness.

Warren Finch, director of the Bush Library and Museum, said Bush's trip to the library and museum about six weeks ago was her last. In recent years she visited around three or four times a month -- her dogs often being the telltale sign that the former first lady was on campus.

Finch said a few thousand people have visited the library and museum since her death. Finch, who attended Saturday's funeral, interacted with the former first lady many times over the year and said he'll remember her for her advocacy and wit.

"They just don't make them much like that any more," Finch said. "She was a wonderful, wonderful woman. A true lady."

When Jessica Thomas was a child, a gift of a few books from former first lady Barbara Bush helped ignite her love for reading.

Former President George H.W. Bush has been hospitalized, according to his office.

The gravesite of former first lady Barbara Bush opened Monday to visitors and will remain open during regular hours of the George H.W. Bush Presidential Library and Museum: 9:30 a.m. to 5 p.m. Monday through Saturday and noon to 5 p.m. on Sunday.