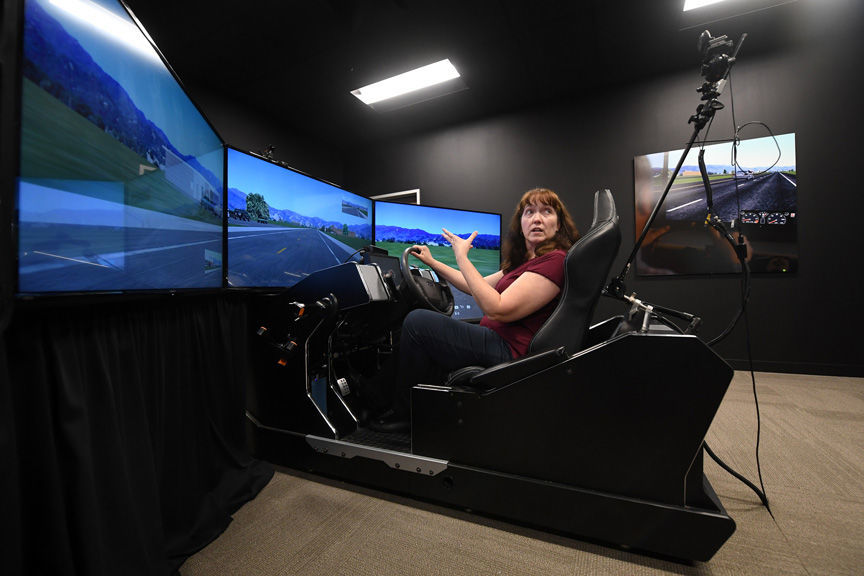 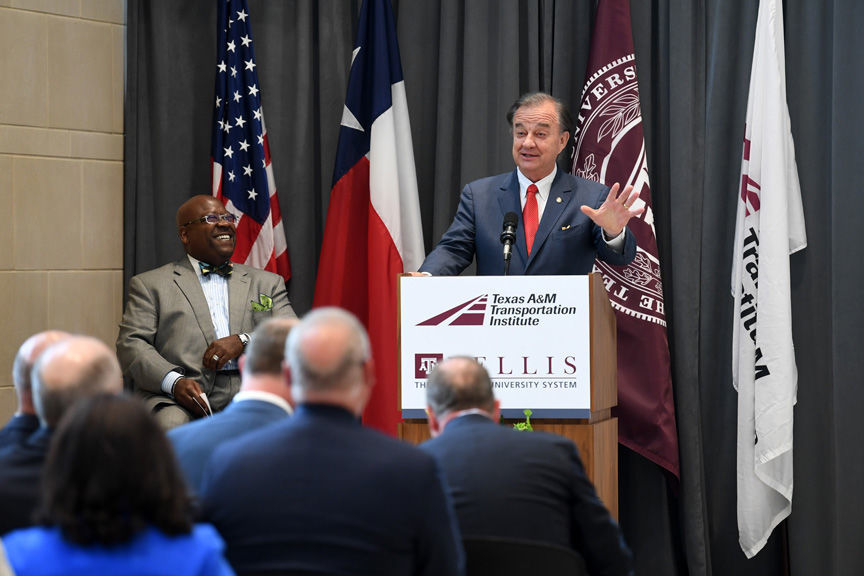 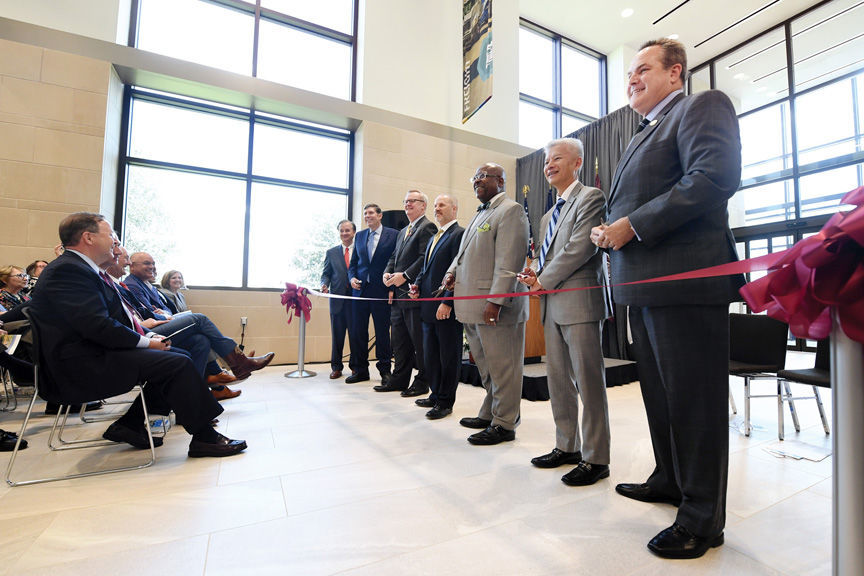 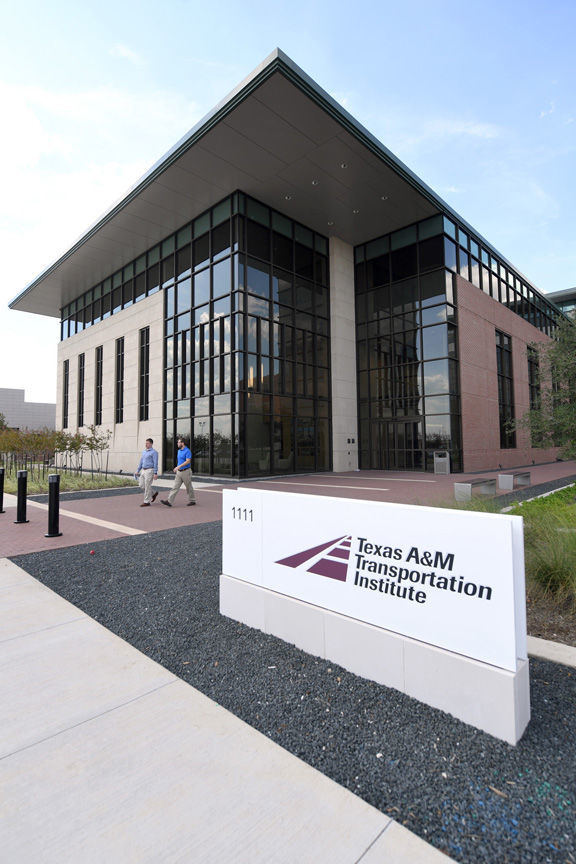 You can read more about the new facility here.

You can read more about the new facility here.

The 180,000-square-foot building — primarily funded through the Texas A&M University System — brings together 450 staff members who previously worked out of two buildings on A&M’s west campus and three rental properties in the Bryan-College Station area. The facilities include a Driving Simulation Laboratory and a Visibility Research Laboratory, which were both open to tour for the more than 200 ribbon cutting attendees. This is the first System institution to locate its headquarters at RELLIS.

While the headquarters cost $70 million for Barlett Cocke General Contractors and Energy Architecture, Inc. to build over the past couple of years, TTI Agency Director Greg Winfree said it will save money on rental costs. Additionally, costs were kept down because it was built on System property instead of new real estate.

“Much like when you move into a new home, you have to unpack the boxes and you have to get the pictures back up,” Winfree said. “You have to make it look like home to have a proper housewarming — and that’s what this is.”

In the Visibility Research Laboratory, researchers can put commercial-size vehicles into night conditions to test how reflective signs and roadway striping are seen with different types of headlights. Winfree said this is useful for human drivers and for autonomous vehicle research. The TTI Driving Simulator uses three 48-inch LCD displays to learn test driver performance, perceptions and attitudes. The data collected helps researchers understand how drivers interact with their vehicles and can assist in learning more about impaired drivers, Winfree said.

While the new building will help staff members advance their research, the institution already has a long history of innovation.

TTI was formally created in 1948 as a connector between the state highway department — now known as the Texas Department of Transportation — but collaboration between the two began in 1917. The original TTI charter was established by the Texas A&M Board of Directors in 1950.

Since then, TTI has assisted in construction of urban interstates, studied integration of high-occupancy vehicle lanes, sign visibility and autonomous vehicles, among dozens of other projects.

“TTI is helping shape the future of the transportation system by setting national standards and pioneering new areas, such as the link between transportation and public health, connected and automatic vehicles and even e-scooters,” TTI Advisory Council Chair David Cain said.

There are seven TTI locations across Texas, an office in Washington, D.C., and international offices in Mexico and Qatar.

“The ribbon cutting of this facility is just the beginning of the next chapter of TTI’s story,” Cain said. “A story of a research team in pursuit of a better way to develop and maintain a safe and efficient transportation system.”

Visitors could also take a ride on TTI’s autonomous shuttle, which will be offering rides between the Corps of Cadets dorms and Southside Garage to A&M students from Monday through Nov. 15.

Texas A&M System Chancellor John Sharp said he is excited for the new facility and proud of the work the institute has done to save tens of thousands of lives through their safety research.

“This one is special,” Sharp said “Everyone knows that TTI is the best at what it does in the United States of America — Period. ... Congratulations to all of you for being what you are and for having a wonderful presence at RELLIS. And when it comes to RELLIS — you ain’t seen nothing yet.”

The Texas A&M University System’s first academic building on the RELLIS campus in Bryan formally opened for use Wednesday morning.

The Texas A&M University System Board of Regents unanimously approved a plan Thursday afternoon to construct a $130 million testing hub and combat development complex for the U.S. Army’s Futures Command at the RELLIS Campus in Bryan.

Officials gathered Wednesday at the RELLIS Campus to break ground on the $15 million Agriculture and Workforce Education Complex, scheduled to be finished next summer.

A report by the Texas A&M Transportation Institute indicates that the average automobile commuter nationwide lost more than 54 hours — more than a week’s vacation — to sitting in ever-worsening traffic in 2017. The figure in 1982 was 20 hours.

About 200 transportation experts from Texas and across the country concluded their time at the fourth annual Texas A&M Transportation Technology Conference on Wednesday afternoon.

The Texas A&M University System’s RELLIS Campus has changed dramatically since May 2, 2016, when System Chancellor John Sharp announced his plan to rename the Riverside Campus and build up a multifaceted education, testing, research and high-tech workforce development hub on what was once the Bryan Army Air Base.

Whether live animals and robot creations in a petting zoo, learning about the science of barbecue, watching drones fly or exploring a UH-60 Black Hawk helicopter, there was something for everyone in the crowd of thousands Saturday at the RELLIS Campus’ first festival and open house.