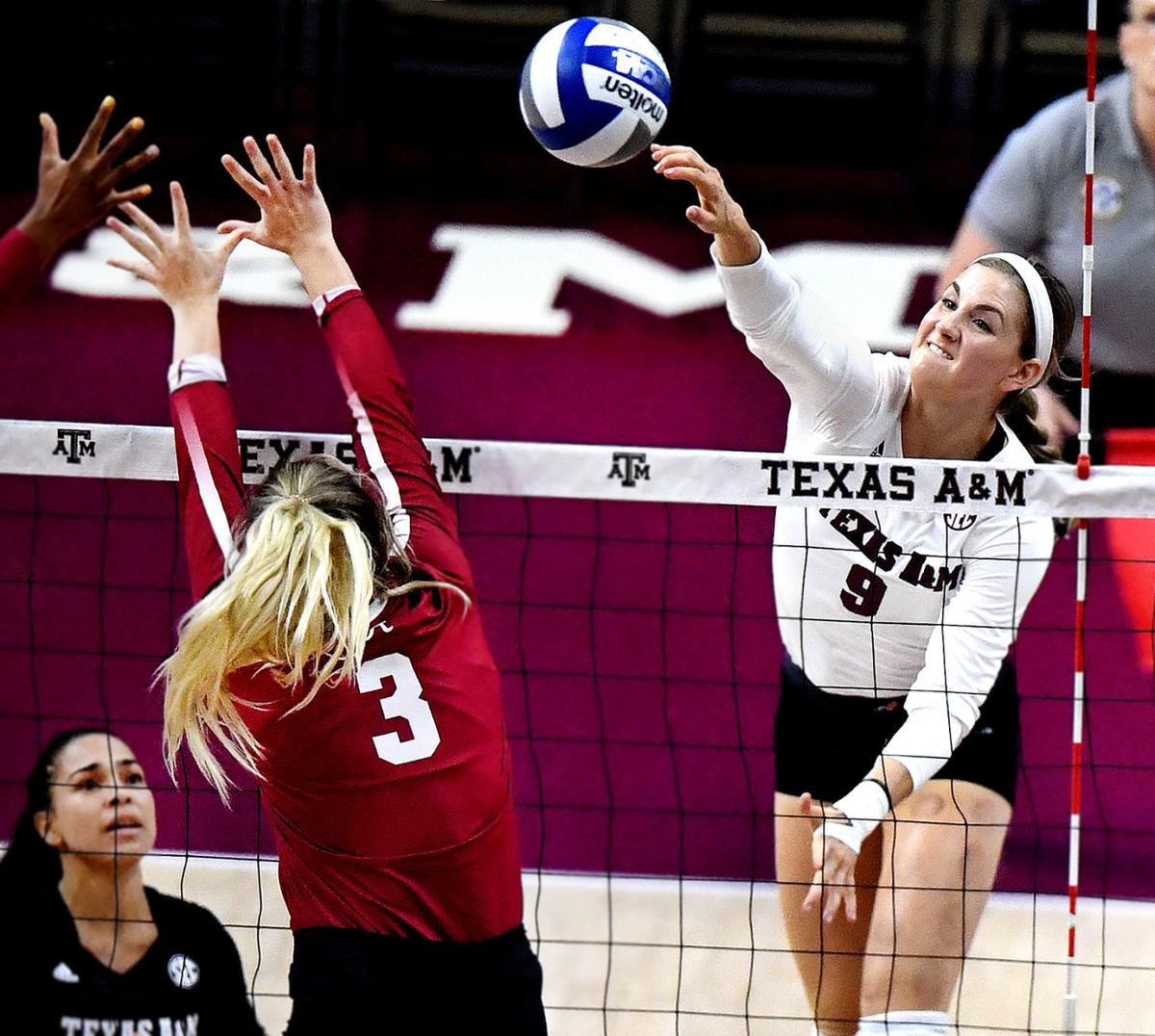 Texas A&M’s Hollann Hans spikes the volleyball past Alabama defender Erin Curl (3) during the first set at Reed Arena on Sept 24. Hans was named SEC offensive player of the week Monday after helping the Aggies to a pair of road wins over Mississippi State and Ole Miss. 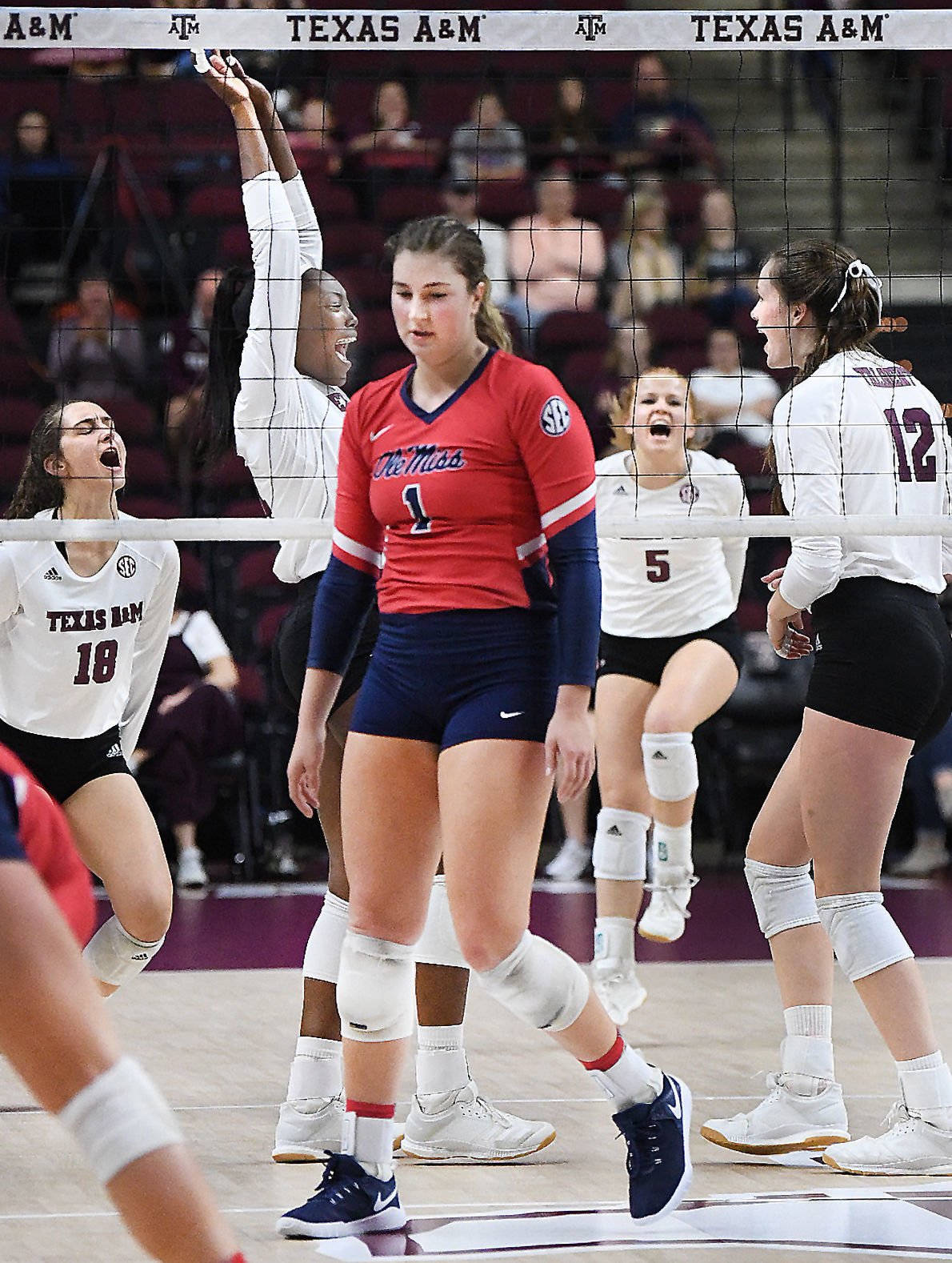 Texas A&M’s Hollann Hans spikes the volleyball past Alabama defender Erin Curl (3) during the first set at Reed Arena on Sept 24. Hans was named SEC offensive player of the week Monday after helping the Aggies to a pair of road wins over Mississippi State and Ole Miss.

The Texas A&M volleyball team earned the 13th seed for the NCAA tournament and will host the first two rounds Thursday and Friday at Reed Arena.

The second-round winner advances to the Madison (Wisconsin) Regional on Dec. 13-14. Host Wisconsin is seeded fourth.

Kentucky is seeded ninth for the tournament and Florida 10th. Other SEC teams in the field are Georgia, Missouri and South Carolina. Baylor is the No. 1 seed and Texas is seeded second. Also making the field were Texas State and SFA.

A&M, which tied Missouri for third place in the SEC behind co-champs Florida and Kentucky, finished 12-1 at home, its best mark since 2000. The lone loss to then-No. 14 Florida in five sets.

Kuhn on Sunday was named SEC Coach of the Year by the league’s coaches and senior outside hitter Hollann Hans and junior setter Camille Conner were selected to the SEC first team. The Aggies were 17-13 in Kuhn’s first season, tying South Carolina for fifth in the SEC at 10-8. A&M was picked to finish sixth this season.

Hans claimed her second consecutive first team all-conference honor. Hans leads the SEC in aces (52) and is second in kills (471) and points per set (5.06). Conner picked up her first All-SEC honor after quarterbacking the Aggies’ offense. Conner ranks fifth in the SEC in assists per set (9.65).

Also honored on Sunday were outside hitters Lauren Davis and Treyaunna Rush, both of whom were selected to the All-SEC freshman team.

Davis ranks second on the team in kills (234), reaching double-figures for kills 10 times, including a high of 19.

Rush ranks third among Aggies in kills with 158 and blocks with 73. She registered a career-high 12 kills at No. 15 Kentucky on Nov. 1 and tied that on Saturday at No. 15 Florida.

COLUMBIA, S.C. — Texas A&M senior outside hitter Hollann Hans had 20 kills to lead the Aggies to 25-22, 23-25, 25-22, 25-16 Southeastern Conference victory over South Carolina on Wednesday at the Carolina Volleyball Center.

Texas A&M junior Camille Conner was named the Southeastern Conference volleyball’s setter of the week for a third time. She combined for 80 assists, 28 digs and 15 kills in victories over Ole Miss and Mississippi State.

In a postgame video presentation honoring the Aggies’ four seniors at Reed Arena, outside hitter Hollann Hans was described by coaches and teammates alike as the Texas A&M volleyball program’s rock — always even-keeled and steady.

Kuhn's style has Aggie volleyball team connecting on, off court